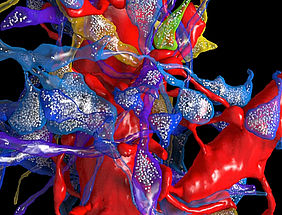 Synapses in contact with a dendrite (the large red object). The white dots are synaptic vesicles inside axons. Credit: N. Kasthuri et al./Cell

Researchers at the Boston University School of Medicine with the support of tools developed at Harvard and MIT and in cooperation with the Connectome project have published amazing 3D photos of a tiny area of a mouse brain (about 1 cubic millimetre), in particular the one receiving signals from the mouse whiskers.

You can see one of them in the photo I inserted in this post, but you can see several more in their article.

The researchers have taken a one cubic millimetre of a mouse brain and have sliced it into thousands of slices each 29nm thick and have scanned each of them with an electronic microscope at a resolution of 3nm, that is 30 atoms resolution.

This was quite a challenge, but an even bigger one was to re-assemble all the scanned slices to get the 3D representation. The reassembling was done using a special program, VAST, that can identify and track each slice and the objects it contains /neurones, dendrites, axons, synapses...). This program is also used in the Connectome project as a first help. Then human assistance is required to fill the gaps, a gigantic endeavour that uses crowdsourcing to move on.

The 3D rendering assign "false" colours to the various structures to provide an easier to understand image. I have to say that the images produces are beautiful, at least to my eye. The beauty of complexity.

Interestingly, the images are showing structures that are not random, as you would expect, but they are not ordered as you would have expected. It looks like chaos, but it is somehow a functionally organised chaos. Which of course begs the question: how are this semi-chaotic structures born? Are they important to the functioning of the brain and can we tell, just by looking structures at this level of resolution, if that brain has problems?

According to the authors this has been one of the motivation of the study, to understand structural anomalies at an unprecedented level of resolution as a first step to look for a cure.

Clearly, the overall working of a brain involves its structures, nano-micro and macro structures, but is also involves the chemistry (and DNA) in its neurones and astrocytes and the signalling among the various parts. It is not just complicated, it is a complex structure and any reductionist approach is bound to fail, at least this is my opinion. However, if we can use the nano resolution a a component in a much more complex "ensamble" we might move a step forward onto a way that has no end in sight, but that is, at least for me, very worth walking.