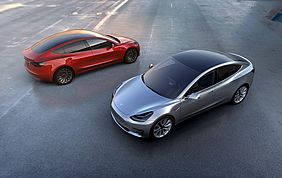 Tesla cars reports their whereabouts and all the car and engine parameters to the home factory. It is like having test cars completing 100,000 miles per hour! Credit: Tesla

There are quite a bit of Tesla cars around. Not as many cars as other brands, true, but these are special cars, in a sense they are cars 2.0. Connected cars.  And Tesla is leveraging from this connectivity.

Sterling Anderson, Tesla Autopilot's program director, has revealed that Tesla has accumulated over the last 18 months data from the 780 million miles Tesla cars drove in the US. And every 10 hours they accumulate another 1 million miles, that is 100,000 miles worth of data every single hour.

Interestingly, the goal of Tesla is to share these data ... among cars. As one car learns something, like the effect of a certain decision in a certain situation, this knowledge is shared among all Tesla cars so that they get prepared to face something new.

Although Tesla is just at the starting block, in terms of autonomous driving, it hopes to jump start competition through this harvesting and sharing of data. The idea of Elon Musk is to gain small incremental steps that eventually will result in autonomous driving.
In comparison, Google cars have already driven 1.5 millions miles in true autonomous fashion. The data gathered from these autonomous driving are used by Google to simulate in its data centres 3 million miles drive per day.

This puts both Tesla and Google in a different league when it comes to analysing data with respect to Volvo, Mercedes and BMW who are all starting to deploy some sort of autonomous driving next year.

What I found really interesting is the value that harvesting data can bring to the understanding a progress in so many different areas.

Leaving aside, for a moment, the issues of privacy and ownership, just image what a communications fabric supporting a tapestry of connected objects (IoT, Internet of Things) will provide.  Millions of vacuum cleaners would provide information on the dust around a city, and low cost sensors might even provide information on the components of this dust. The question is: "will be able to leverage on these data to transform them into knowledge and take actions?".

To me the answer is yes and this will be achieved mostly, my bet, by micro companies that will invent business niches that all together will reshape our perception of the world.  At EIT Digital we are working on a broad spectrum communications platform to support these global IoT interconnectivity and the first results are starting to be visible. This also represent a further step towards the transformation of current wireless networks and network access into the over-comprising 5G.

It is not enough, of course. As enabler, beyond technology, we need political and ethical orchestration. This latter is something IEEE is starting to look at and we should be launching an ethical initiative this June.